There's something magical about a toy that makes your imagination go on and on and on. I really think that the only reason I wanted kids was so that I could have a better excuse to collect and play with these toys. I like these toys so much and the philosophies and memories behind them that I wanted to create this web page so I could see them ever-so-much-more-easily and share them with others that find themselves here in our toy box.

Now I realize that not everything in our "toy box" is really a toy, but let's not be too nit-picky here. Let's just  enjoy ourselves while we look around our toy box and reach into those deep corners where we just might find something almost magical. 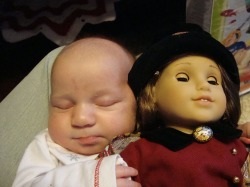 Our daughter was born in November, and we wanted her first Christmas to be pretty special. I knew that my mother would want to get Adah a really special gift for her first Christmas too, and after the idea was put in my head about American Girl dolls, I knew that this would be the prefect gift for Gran to give to her first granddaughter. We thought that we could get the expensive doll out of the way and over the next few years purchase clothing so when Adah was ready to play with the doll, she'd have a nice collection that we built slowly without having to spend a large amount of money all at once.

We really wanted this to be a special gift from my mother so we asked my mother to pick the doll she would like her granddaughter to have. My mother insisted that we pick the one that we like best so we decided on Rebecca. Like Adah, Rebecca had just been "released" to the world in 2009. This was the time that Kirsten was retiring (being archived) from the American Girl line. I knew my mother liked her best, and when we broke the news to her that we had chosen Rebecca, she said that she thought we should get Kirsten since she was retiring.

Ultimately, Adah ended up with both Kirsten and Rebecca, and since Kirsten was being archived, my wife and I tried to scoop up as much of Kirsten's collection (mostly from eBay at high prices) that we could. This means that we actually did not slowly build the collection as we thought we would; Adah ended up with quite a nice American Girl collection at the age of one month. 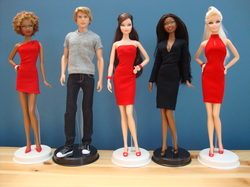 I have noticed these Barbie Basics dolls on the shelves of stores since they debuted in 2010. They are stunning dolls with simple and basic clothing that really captured me as an audience, but I was never really a fan of Barbie dolls. I also thought that they were cheap looking (well, the cheap ones anyway). This line did not look cheap, but they still weren't enough for me to seriously think about collecting them...

Until 2011 when I first began noticing the second collection. This time instead of having twelve women wearing a little black dress, the second collection had only nine women wearing denim jeans and cotton tops. The other three dolls in the collection were men wearing denim jeans and cotton tops. They were were a cool as the women were beautiful. Now with a dude doll that I could play around with when my daughter would say "Let's play with Barbies!" I was able to give into the product line knowing that I wouldn't have to parade a lady doll around speaking in a high pretend voice.

Where the play line of Barbies is cheap and unimaginative in my opinion, the Barbie Basics line is classy, fun, and cool. How could you not fall for it? 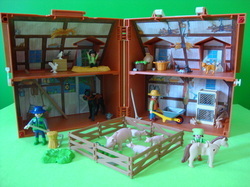 I have always liked Playmobil, but LEGO was the big name in my childhood home. We collected LEGO and did not have room for much Playmobil. Now, I loved and still love my LEGO, but each year I would leaf through that Playmobil catalog and dream about all of the cool sets that I would never own because "we don't have room for that." (Kind of sadistic that my parents always made sure we had the latest Playmobil catalog in the house, huh?)

Now that I get to decide what we have room for, we pretty much have room for everything! My wife and I wanted a nice farm set for our daughter to play with when she's older, and Playmobil definitely delivered. Their Farm theme is amazing with enough animals and tools to keep an imagination active for a lifetime.

Where the Farm theme is our focus, my wife shocked me by insisting that she wanted to collect the African Wildlife theme. I tried my best to talk her out of it thinking that she was only saying that she wanted it because she thought that I really wanted it. I tried to convince her that we wouldn't really have the room to store it (you really do become your parents...) and we could spend that money on other things that we liked, but she insisted that she really liked the theme. Ultimately, the African Wildlife theme reminds us of our Walt Disney World "home" at the Animal Kingdom Lodge's Kidani Village. The animals are so great that they will, like Playmobil does so greatly, offer any good imagination some awesome fun. 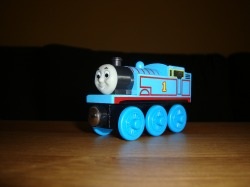 When I was a young teenager, I would watch Shining Time Station finding myself to really enjoy the slow-paced ease of the storytelling. It was through this storytelling where little boys and girls in the States most likely first met Thomas the Tank Engine and his friends. Shining Time Station was a television show about the people that worked or just happen to stop by the titular railway station. It featured a character named "Mr. Conductor" who would tell Thomas stories as breaks in the action at the station house. I was too old by that point to ask my parents to buy me a wooden railway playset, and I did not have enough money to buy one for myself so I just shelved the idea of owning my own Thomas train set.

Fast forward fifteen years to my own child starting to crawl, and you'll see me seizing the opportunity to say, "She needs something to push across the floor with her!" And that was the way that one of my childhood dreams became something real and special to me. We started simply with a dvd, which, in my opinion, Adah enjoyed. We did buy two Lego Duplo sets that feature Thomas characters before we (I) jumped in and bought a few Wooden Railway pieces. I think they are great and really look forward to playing with them when Adah is older. 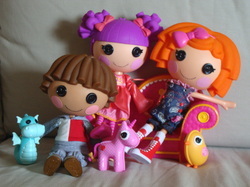 I really like the Lalaloopsy dolls that we have, but my wife seems to be the one that really likes this toy. It's a very cute twist on the classic ragdoll story. The Lalaloopsy mythology says that these dolls came to life when their last stitches were sewn. When they came to life, they took the personality of the fabric of the clothing that they were made from. For example, Sunny Side Up was stitched from a farmer's clothes, and Sir Battlescarred was made from a knight armour.

Again, the girls are cute, but what won this father over was Patch Treasurechest, the first Lalaloopsy boy doll. He was soon followed by Sir Battlescarred and Ace Fender Bender. All three became a part of our collection.

The Lalaloopsy world got more easy to collect with the creation of Mini Lalaloopsy, smaller versions of the dolls that are more like action figures than baby dolls. They each come with a little collection of items that are specific to their personality and larger sets with more accessories were soon available. 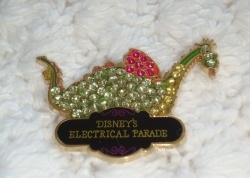 I went to Walt Disney World for the first time in 2006 when I was 26 quite against my initial will. My friends wanted to go and said that they would not go unless I did too. After much debate, arguing, hostility, stubbornness, convincing, and urging, I gave in and had the best time out of everyone in the traveling party. While looking for a great souvenir and having that inborn drive to collect things, the pins easily drew me in. They were fun, plentiful, and beautiful. Of course, they didn't have a Hercules pin, and I was being stubborn again. If I wasn't going to get a Hercules pin, I wasn't getting any pins at all.

Our collection actually started when my cousins took a vacation to Walt Disney World just before or after our wedding (I'm not really sure what cam first). They picked us up the Groom Mickey and Bride Minnie pin and a Donald Duck pin. When Jen and I went back to Walt Disney World in 2009, I bought a pack of pins called "Toddler Boys" because in it was the only Hercules pin currently available. I also got a Disney Vacation Club Saratoga Springs Resort pin because that was the resort we were staying at during that vacation, our first using our Disney Vacation Club membership.

I had only seen the SpectroMagic Parade at the Magic Kingdom that two times I had gone, and after learning more about Disney World was disappointed that I may never get to see the Main Street Electric Parade, which I felt sounded 100 times better. During our 2010 vacation, I freaked out driving down a four lane highway because a billboard my wife pointed out announced that the Main Street Electric Parade was back at Walt Disney World for a limited time, and I was going to see it. When I saw the Elliot float pin from the Electric Parade, I knew that was one of my pins for this year.

Disney pins really are great memory keepers because there are so many different pins available; everyone is sure to find one that has a special meaning to them like the pins in our collection have for me. 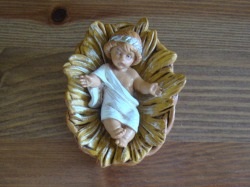 I'm pretty big on family traditions, and as my wife and I started to put our home together, I realized that we would need a nativity set for underneath our Christmas tree. I wanted something special and found it pretty easily in a local Catholic goods shop. The Fontanini Nativity Collection is huge with pretty amazing pieces to choose from, and I do mean choose. I don't think it would be possible to own and display every piece made; although I'm sure there are those mega-collectors out there that do.

What drew me to the collection other than the beauty of the figures were the story cards. Each piece comes with a fictional story about what life may have been like in Bethlehem at the time of Jesus's birth. Some of the stories overlap making one large story, and I thought it would be a great tradition to read through the stories each year.

We bought the pieces that we liked, and I was lucky and clever enough to pick up an entire line of the limited edition pieces through multiple auctions on eBay. We realized that there was no way our collection would fit underneath the Christmas tree though so it is displayed prominently in our dining room each Christmas.